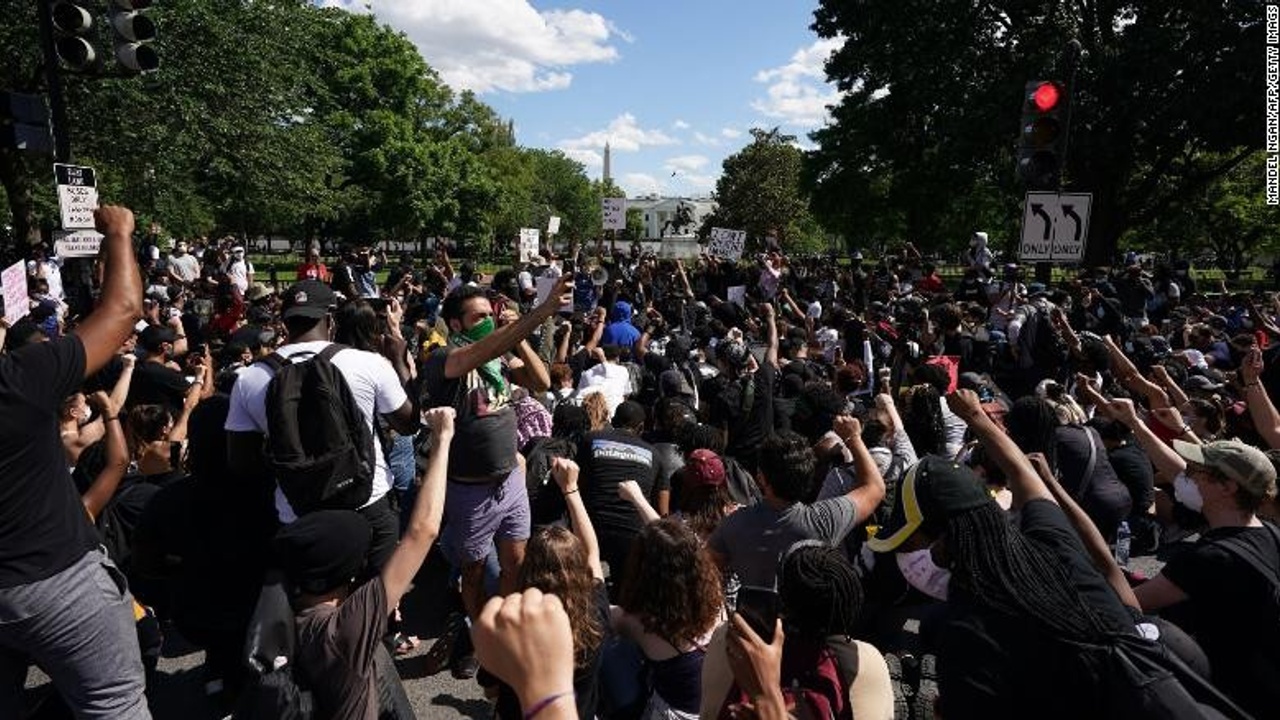 Hong Kong (CNN Business)Facebook is donating $10 million to groups fighting racial inequality as mass protests sweep across the United States after an unarmed black man died at the hands of a police officer in Minneapolis, Minnesota. "We stand with the black community," CEO Mark Zuckerberg wrote in a Facebook post late Sunday, adding the Silicon Valley tech firm to a growing list of companies that have responded to the protests with condemnations of racism, calls for solutions to the escalating discord in the country and promises to address diversity and inclusion at their businesses.

Twitter, Nike, Netflix, Disney and other firms have also weighed in.Zuckerberg added, though, that Facebook needs to do more to keep people safe and avoid promoting bias as it faces scrutiny for how it is handling online discussion of the protests.
"I know that $10 million can't fix this," he said. Demonstrations have been taking place for almost a week throughout the United States after a former Minneapolis police officer was seen kneeling on George Floyd's neck in a video. The officer, Derek Chauvin, was fired after the incident. Chauvin has since been charged with third-degree murder — but protesters are calling for stronger punishment, as well as charges for the other three police officers who were involved.
Many say that Floyd's passing has highlighted the unequal treatment of African Americans across the country. Over the last few days, some of the protests have become violent, with demonstrators starting fires and looting local businesses. In response, at least 40 cities have announced curfews, pleading with protesters to go home.

Zuckerberg said in his post that he and his wife, Priscilla, have been supporting organizations working against bias in the criminal justice system for years, committing around $40 million annually to them. But he also said the company must do more.
"To help in this fight, I know Facebook needs to do more to support equality and safety for the black community through our platforms," Zuckerberg said, adding that he was "grateful" that video of Floyd's encounter with police was posted on Facebook "because we all needed to see that." "But it's clear Facebook also has more work to do to keep people safe and ensure our systems don't amplify bias," he said.
Unlike Twitter (TWTR), for example, Facebook (FB) has not affixed any warning label to posts by President Donald Trump that threatened "looting" in Minneapolis would lead to "shooting." Zuckerberg has said his company "read it as a warning about state action, and we think people need to know if the government is planning to deploy force." Twitter, meanwhile, recently added the "#BlackLivesMatter" slogan to its official bio, and on Sunday presented a list of accounts for users to hear more from "marginalized groups."
"Diversify your feed," it suggested in a tweet. The company earlier this year pledged to have under-represented minorities make up a quarter of its US workforce by 2025.

Other companies have also responded to the unrest, vowing to step up on the issue.
Fitness startup Peloton (PTON) announced Sunday that it would donate $500,000 to the NAACP's legal defense fund as a way to support black communities. The NAACP, or the National Association for the Advancement of Colored People, is a major civil rights organization in the United States. "Black lives matter," Peloton CEO John Foley wrote in a message to users. "This week, what's become clear to me is we must ensure this is an anti-racist organization."
On Friday, Nike (NKE) reversed its iconic "Just Do It" slogan in an online video, saying: "For once, Don't Do It." "Don't pretend there's not a problem in America," the message read. "Don't turn your back on racism. Don't accept innocent lives being taken from us. Don't make any more excuses. Don't think this doesn't affect you. Don't sit back and be silent."
Netflix (NFLX) and Disney (DIS) echoed that sentiment. "To be silent is to be complicit," Netflix tweeted Sunday. "Black lives matter. We have a platform, and we have a duty to our black members, employees, creators and talent to speak up."
In a memo to employees, Disney's chairman, CEO and chief diversity officer vowed to step up their inclusion efforts, "to ensure we are fostering a culture that acknowledges our people's feelings and their pain." "While these devastating incidents are not new, there's something unique about what's happening in this moment," Bob Iger, Bob Chapek and Latondra Newton wrote. "The pandemic coupled with these recent injustices have pushed the issues of racial disparity into the open."
Snap (SNAP) CEO Evan Spiegel told employees in a memo that he's "heartbroken and enraged by the treatment of black people and people of color in America."
In the letter provided to CNN Business, he criticized the racial and wealth inequality in the United States. He said the government should create a "progressive income tax system," which calls for large companies to pay more in taxes and a "substantially higher" estate tax. "Entrepreneurship depends on people being able to take risks to start a business, which is nearly impossible to do without some sort of safety net like the one I had," Spiegel said. He also proposed Commission on Truth, Reconciliation, and Reparations, a non-partisan group that address racism and pay reparations.
"There is plenty to learn from those who have had the courage to undertake a similar process following atrocities around the world, and we should create a process that reflects American values and helps our nation to make the necessary change and heal," he said.
Tim Cook, CEO of Apple (AAPL), also shared his thoughts in a letter sent to employees confirmed to CNN Business. He said he's heard from employees that feel "afraid" in their own communities because of recent events and is making a "number of groups" that help fight racial injustice. Cook said that Apple has "always drawn strength from our diversity, welcomed people from every walk of life to our stores around the world, and strived to build an Apple that is inclusive of everyone." He added that people "may want nothing more than a return to normalcy, or to a status quo that is only comfortable if we avert our gaze from injustice. But that "desire is itself a sign of privilege."
Intel (INTC) CEO Bob Swan also addressed his employees, writing that "Black lives matter. Period." His company is also pledging $1 million to be donated to community organizations focused on social injustice.
"While racism can look very different around the world, one thing that does not look different is that racism of any kind will not be tolerated here at Intel or in our communities," Swan said.
Levi's (LEVI) said Monday on its Instagram account it was donating $100,000 to the ACLU. Verizon (VZ) also announced it was donating a total of $10 million to variety of social justice organizations, including the National Urban League and the NAACP.
Not everyone's comments have been well received.
The NFL was fiercely criticized after addressing the deaths of Floyd, Breonna Taylor and Ahmaud Arbery on Saturday. Commissioner Roger Goodell said in a statement that "the protesters' reactions to these incidents reflect the pain, anger and frustration that so many of us feel." "These tragedies inform the NFL's commitment and our ongoing efforts. There remains an urgent need for action," he added.
Some critics accused Goodell of making empty platitudes, citing the experience of Colin Kaepernick, the ex-NFL quarterback who was famous for protesting the treatment of black Americans — particularly by the police — before games. Kaepernick has not found a football team since 2017, which some believe is due to his political views.
"Shame on you. This is beyond hollow + disingenuous," film director Ava DuVernay tweeted in response to the NFL. "You've done nothing but the exact opposite of what you describe here."
— CNN Business' Jordan Valinsky and S. Mitra Kalita contributed to this report.